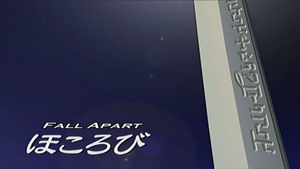 Fall Apart is an episode from the anime series Zoids: Genesis based on TOMY's Zoids model franchise.

This episode begins with word being rapidly spread about the successful surprise attack. As Yakku spreads the word, troops begin to head to Ra Kan, including the Molga unit that was previously undecided, although in this specific case, they are annihilated as they happen across Zairin's Bio Volcano.

While Ra Kan is out, Da Jin is approached by some disgruntled citizens, who ask for him to stage a coup against Ra Kan. Ruuji and co arrive back in Zuuri, only to find the elevator not operational, with Da Jin having asked everyone to wait out side the city's gates. Danbul jokingly attributes this to old age, musing that he'd simply forgot about the stranded citizens, so Galaga shouts his name out, and while everyone just dismisses this as foolish, when Mii calls out, she is collected by a servant and, along with her Zoid, is the only one allowed up into the city. But inside, Mii is not greeted by Da Jin, who simply asks for her to be treated with respect, and leaves.

Mii, meanwhile, is sidetracked with luxuries, leaving everyone below to speculate as to the events occurring inside. Galaga joking guesses the truth, that a coup is being staged, but is quickly reminded of the truth. That Zuuri was built to be a new Kida, and that redevelopment came first, fighting Digald, second.

But Ron quickly sees the problem: any newcomers may flee at the army's next loss, thus ending the collective a second time. Not wanting to be associated with a failed group, Zuuri would thus preemptively seek to separate itself from the army, even if that meant locking Ra Kan out of his own country. Ra Kan agrees with Ron, but nonetheless is steadfast in his belief in his people. He moves to try and talk to Da Jin, but is stopped by Seijuurou, and realizes the folly of this course of action. No-one would argue with their own Lord, they would simply be ordered by him, and their feelings of rebellion would not be put at ease. Thus, he sends Ruuji instead.

He is flown in by the Rainbow Jerk, and he quickly makes his way inside the capital, only to see Mii being kept away from Da Jin. He asks for an audience with Da Jin, and has better luck, and the two of them are able to track him down. But once found, he quickly challenges Ruuji to a duel, the winner being the one to decide the fate of Zuuri. Ruuji asks for one condition, that the battle be with Zoids, and Da Jin accepts.

The Murasame Liger and Da Jin's Lanstag fight, but Ruuji holds back, not wanting to kill Da Jin, who is willing to throw away his own life to ensure Zuuri's cooperation. Eventually, he corners the Liger, but as he moves to make the final blow, Ruuji Evolts into the Mugen Liger. He reminds Da Jin of the only reason he's fighting Digald, to save the people who are suffering all over the world, not just the people in any one city. But Ruuji refuses to finish him off. Instead, he tries to kill himself on Ruuji's blades, but is stopped by Mii, who orders him to cease his actions. With this, the populace is settled without any blood being spilled.

The episode ends with Ron asking Ruuji about what he's going to do with the leader of the rebellion, to which Ruuji offers the explanation that, rather than a rebellion, this was a ceremony that brought the people together, and thus warranted no punishment, much to everyone's delight. But mere meters from where they spoke, a wounded Souta collapses, as a swarm of Digald Bio Raptor Guis begin their assault on Zuuri.