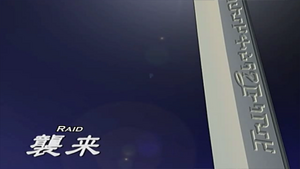 Invasion is an episode from the anime series Zoids: Genesis based on TOMY's Zoids model franchise.

The episode begins with Jiin preparing his troops, while a Decalto Dragon flies over Digu. This causes the emperor to summon Jiin, noting that this was the first time the Sky People have sent a Dragon to the surface, and knows that it must be in response to them witnessing the development of the Bio Raptor Gui. Jiin reassures him that all is well, and goes to negotiate with the Sky people. They deem his development of the flight-capable Zoid, something completely forbidden under the contract that they had made with Digald. He reassures that the Gui cannot attack the Sky people, something Felme later reveals is an outright lie, and says that he has simply developed it to overcome the fort of Zuuri, who, if left unchecked, will someday amass their own flying army.

The sky people know he is untrustworthy, but dismiss the Gui army, worrying instead of the slumbering Gildragon, which is briefly shown in a flashback.

The Gui army fly from Digu to Torafu for refuelling, before attacking Zuuri directly. Them commence a bombing run, and start laying waste to the city. A squad of Beam Tortoises move to couterattack, but their lasers are useless against their Bio Armour, and they are swiftly defeated. Kotona moves to sortie, but is stopped by Ruuji, while Ron fires a barrage at the Guis. Though somewhat successful, he quickly runs out of ammunition. The civilians are evacuated to the lower entrance, to wait for the raid to eventually end. Even the wounded Souta is picked up and assisted.

Kotona later returns to Zuuri, having been sent on a scouting run to investigate where the Bio Zoids had come from. She reveals that they had come from Torafu, while Mii nurses an amnesiac Souta (who she dubs "Gin", due to the silver necklace he was wearing) back to health. Eventually Kotona notices the boy, and recognises him as a Digald soldier. He quickly snaps and runs out. Mii follows him, while Kotona informs the others, who not only hope to protect themselves from Gin, but also Gin, who may be attacked by Digald-hating citizens.

As Gin flees, he hijacks the Deadly Kong and attacks Ruuji, who's Liger he recognises. Ruuji uses the Mugen Liger to pin him, but when the citizens act on their hatred, the situation threatens to get ugly. Ruuji stops them, reminding them of the fact that Digald often recruits its pilots by force, and when they see that Gin is naught but a child, they calm down, allowing Ruuji to take Gin to safety.