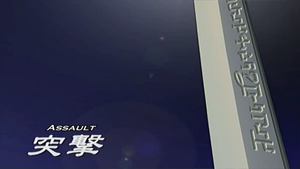 Charge is an episode from the anime series Zoids: Genesis based on TOMY's Zoids model franchise.

The episode begins with Jiin annihilating a swarm of Bio Raptors with a single shot from his Zoid's flamethrower. He is quickly informed of Felme's successful assault on Zuuri.

Meanwhile, in Zuuri, the citizens try to recuperate, but are terrified by the mere sight of a flock of birds. They think of fleeing, but realize that if Zuuri wasn't safe, then no-where would be. For now, the underground portion offered refuge, but any prolonged battle with Zoids with airborne would not only break their spirits, but once again give Digald the self-confidence to rapidly expand their empire.

Ruuji thinks of an idea to deal with the Bio Zoid threat, but it is not one without risk, and he cannot bring himself to share the plan with the others. He is pleaded with by Da Jin, and eventually agrees to share his plan, one that would inevitably result in massive damage to Zuuri. But regardless, to end their suffering, Da Jin urges him to speak.

And speak he does. His plan is to artificially make Zuuri look undamaged, so that Digald will attack them once again. Then, when they head back to refuel, they will be vulnerable, and thus be able to be annihilated.

While this is going on, more forces arrive, hearing of the successful attack on Digu, and they are quickly put to work preforming manual labour, much to their surprise. Holes are covered with canvasses, broken walls with paintings of walls, and ruins are covered with false ceilings. While they work, Ruuji talks to the new recruits, and from them, is able to figure out the positioning of Digald's forces. Mii talks to the now-incarcerated (and still amnesic) Gin, and while she can't let him out of prison, tells him that she will be leaving, and promises him that she'll return quickly.

Digald Bio Raptor Gui scouts fly overhead and notice that there is no damage to the city, before being warded off by a barrage from the city's Molgas. Felme, not wanting to have sent a false report to Jiin, quickly gathers her troops, thinking that her overestimation of the damage was due to the fact that her vision was impaired by smoke. She quickly prepares her forces for one more assault.

Ruuji's group, with Ron carrying far more ammunition than normal, head out to attack the base, utilizing the information from the new forces to make their route a stealthy one. However, one of Borra's men happens across a glint of light in the forest. Borra, not wanting to take any risks, sends scouts out anyway.

Ron prepares his Bamburian while waiting for the Raptors to return. In the meantime, Zuuri is pounded by the massive air force, though even Felme wonders why their resistance is so weak.

Upon returning, moments before the trap is sprung, they are uncovered by Digald scouts. Everyone moves to protect Ron, and quickly, all of Digald's infantry. They manage to stall as Ron blasts the base, and the massive Gui force, with three times his usual number of missiles. Unable to counterattack without Reggel, Digald's airforce is quickly annihilated. With that done, they shift to attacking the fort directly, but are pounded by the base's artillery.