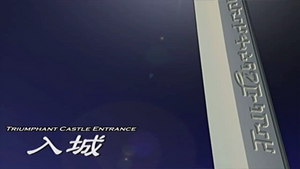 Enter the Fortress is an episode from the anime series Zoids: Genesis based on TOMY's Zoids model franchise.

Picking up where they last left off, with Ruuji and co. being bombarded by Torafu's artillery, as they approach the base on the sole stretch of dry land leading to its gate. The gate begins to close on them, so Ruuji Evolts to the Hayate Liger, but is still unable to get past the base's overwhelming cannon fire. With this, they are forced to retreat.

Inside, Boraa decides to seal himself inside, putting priority on the base's integrity, rather than on fixing the airport (much to Felme's displeasure). They are amazed that Torafu was in such a well-ordered state, even after such massive damage was dealt to the air force.

The remainder of their forces assemble, but are unable to enter with the heavily fortified citadel. Located in the middle of a swamp, their attack options are limited to a small stretch of land that is extremely exposed, and simply means that they would be easy prey for Digald's guns. But attack they must, for without the seizure of Torafu, Digald's airforce would surely destroy Zuuri.

Inside, Felme launches the remainder of her Gui forces, usurping the command of Boraa. Meanwhile, Ron arranges things on his own, while preparations are made to attack Torafu. Using Tize and Gabbal's Brastle Tigers, Ruuji is able to boil the swamps around the base. With the resulting stream as cover, Ruuji and Ra Kan's forces invade the base, but just as they arrive, a beam of light smashes into the base and causes it to explode, annihilating the airfield. Boraa deploys his men, so Seijuurou, Ruuji and Galaga head to ward them off. Felme notices this and orders the cannons to put up a barrage. The wall is then overcome by using Hakku's Elephander as a stool to get the Sword Wolf inside, where it weakens the gate, allowing the Elephander to smash it down.

Ra Kan's forces pour in, as Ruuji uses his map to navigate around the city, with Kotona providing support for everyone else. Felme decides not to give them the base intact, and moves to destroy any advantage they would gain from the base by destroying the generator. Ruuji notices this and is outraged. He uses the Hayate Liger to scale the Generator and block the Ptera's attack, before jumping, Evolting in mid-air into the Mugen Liger to increase his reach, and stopping the assault. Kotona moves to finish the Zoid off, but is stopped by Kamikaze Guis.

After the battle, the wounded are attended to, including Boraa himself, who was badly wounded at the start of the battle.

Ron takes Ruuji downstream to show him what caused the explosion before the attack, the Decalto Dragon. Here, Ron reveals his comrade, Para, his superior, and reveals his own true identity, as a member of the Sky people, citizens who live on a large flying city, still with the technology of the civilization lost by the apocalypse thousands of years ago. Ruuji is surprised, but understanding, as he had already figured out that something strange was going on, like how Ron got a new Zoid, how he was so knowledgeable about ancient lore, and, finally, about where Digald were getting their Bio Zoids from. Ron confirms his suspicions, explaining that Sora city was trading technology for Reggel. They had not imagined that this would lead to a Digald's setting about on their conquest of the world.

Meanwhile, Jiin, hearing of the loss of Torafu, sends Zairin to reclaim it, something he gladly accepts.

Retrieved from "https://zoids.fandom.com/wiki/Zoids:_Genesis_Episode_39?oldid=62527"
Community content is available under CC-BY-SA unless otherwise noted.