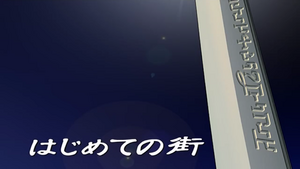 City of Beginnings an episode from the anime series Zoids: Genesis based on TOMY's Zoids model franchise.

The episode begins with Ruuji and Ra Kan, who enter the city of Harayado, the first city Ruuji has ever seen. They stop on the outskirts and Ra Kan and Rei Mii head into the city to check to see if its safe, just in case Digald are already there.

Ruuji notices a flying Zoid pass overhead and watches it through his spyglass. Naively, he thinks that if the city has lots of Zoids, then it must have alot of Generator mechanics, and heads into town regardless of Ra Kan's advice. He is encouraged by the town's gatekeeper, who, despite not knowing of one, tells him that he's likely to find one anyway. Ruuji quickly gets into trouble by breaking the road rules. This scene is watched over by a group of bandits who, spurred on by a woman named Kotona, decide to steal it from the obviously inexperienced Ruuji.

Kotona shows up with Ruuji and talks to the people he had caused to crash, they quickly forgive him (or, rather her), and Ruuji is able to get away. Ra Kan and Rei Mii learn of the thieves, and, believing Ruuji was still outside the city, think nothing more of it.

Kotona lure Ruuji away from his Zoid, and the bandits step in to steal it. She takes Ruuji to a restaurant, where he tells her why he's in the city. She tells him that not only does she not know of any mechanics, but, much to his surprise, that Harayado is actually a small city.

It is then that Kotona reveals her true intentions, that she had infiltrated the gang of thieves in order to catch them in the act, allowing her to arrest them. Ruuji just happened to be the bait in her operation.

She sets after them with her Rainbow Jerk, although she lets Ruuji tag along. With the bandits still thinking she's an ally, she uses her Paralyser attack, and knocks out the thieves' Zoids. She is caught off-guard by an underground Stealth Viper, but Ruuji rescues her with his Liger. He makes short work of their Baratz, as does Kotona. Ruuji engages with the leader's Shadow Fox, and although it uses a Strike Laser Claw, Ruuji is able to evade and chop its head off, before racing back to camp, while the police round up the thieves. He manages to arrive back before Ra Kan and Rei Mii, and the episode ends.