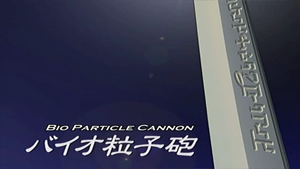 Bio Particle Cannon is an episode from the anime series Zoids: Genesis based on TOMY's Zoids model franchise.

The episode begins with Zairin's forces moving toward Torafu. The fact that he is still suffering from fatigue is apparent.

Inside Torafu, Ra Kan is urged to look after Boraa by the mayor, citing him as a gentleman, a request he promptly accepts. Outside, their flag in unfurled, a simple flag with four triangles on it, two blue, one red and one white, to represent the three colors of their iconic Zoid, the Murasame Liger. Word of their success rapidly spreads, and groups from all over move to join Ra Kan's movement. these include pilots of Sabre Tigers, Command Wolves, a Beam Tortoise and a group of multi-coloured Molgas...

...Inside, Ra Kan assigns duties to the remainder of his team, so that they will be far more organised, and never repeat the tragedy that occurred in the River of Fog. Ruuji is assigned as the leader of the first division of the army's forces, with Galaga being the second.

As the duties are handed out, the day draws on, with one final team being assigned to nothing but pure cooking duties. While assigning this final group their duties, Tize briefly looks up at A Dan (one of Ra Kan's men), before asking whether such a group should even exist at all. Ra Kan just accepts the idea, thinking that they'll probably be helpful, and everyone retires to the food halls, night having fallen while the meeting was underway. On the way to the hall, Mii notices the multi-coloured Molgas parked outside...

...The group sits down to eat, but Ruuji finds the flavor of the food odd, and strangely, so does Galaga. They realise that the taste is similar to Muu's, whom they had stayed with after fleeing from Ze Ruft many episodes ago, and Galaga bursts into tear over the memory of his deceased comrade, though no-one else knows what brought on their sudden depression.

But across the room, Muu, along with A Kan, Ten, Gotoshi and Saiko, watches them eat. She points out the two who look oddly like Ruuji and Galaga to the rest of her team. They recognise the similarities and then...

'"Bit by bit! Till Digald is defeated! We are! Tenka Muteki no, Muteki-Dan!"'

With that, the boisterous reunion is triggered, with Ruuji and Galaga appearing across the room to join in on Muteki-Dan's 'epic' poses. The introductions are not particularly quiet, and A Dan and Tize burst into the room to see what all the fuss is about. Ruuji tries to explain, but is cut off by A Kan, who reveals herself to be his "Invincible" younger sister, and the "Invincible" family is placed one step closer to reunion!

Seijuurou moves to call them all idiots, only to be beaten to the chase by Mii, leaving him just standing there awkwardly without anything to say.

Meanwhile, back with the serious business elsewhere, the ever-worsening Zairin prepares a plan to invade Torafu. firstly, send in Bio Raptor squads, then, if that fails, using them as decoys to let his Bio Megaraptor force to scale fort's walls and secure victory. He moves his forces out, and the anti-Digald army scrambles to defend themselves, sealing all the base's gates. Using their newly-developed organisation, they quickly set about counterattacking. Zairin, noting their speed, quickly adapts to stage two of the plan, and deploys his squad. Muteki Dan provide the supplies to the rest of the forces. But the Megaraptor squad is noticed, and Ruuji and Seijuurou are sent to intercept. The nimble Bio Zoid take no time in scaling the wall, but are repelled when they reach the top by Ruuji and Seijuurou. Zairin and Ruuji duel atop the wall, and Ruuji, knowing that both the Hayate and Murasame do not stand a chance against the Volcano, quickly Evolts into the Mugen Liger. Zairin is impressed, but not put off, and is able to knock Ruuji to the edge of the wall. But before he can land the final blow, his body shuts down completely. Suddenly, his on board computer starts itself up, confirms the Liger's presence and locks onto it with it's Bio Particle Cannon, even against the feeble Zairin's pleas to finish it with his own hands. Seijuurou tackles him just as he fires, and his Zoid takes part of the blast, while Ruuji falls off the wall. The shot misses, and obliterates a mountain range in the background instead. With this, Zairin orders a retreat.

The episode ends with Seijuurou badly injured, though not life-threateningly injured.

Back at Digu, Jiin reassures Zairin that his friend's safety is far more important than the fort, though seeds of doubt have already been laid in Zairin's mind, and after the meeting ends, he collapses in the hallway.