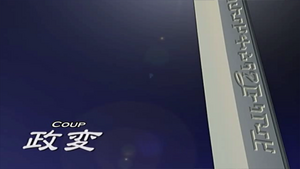 Coup is an episode from the anime series Zoids: Genesis based on TOMY's Zoids model franchise.

The episode begins in Digu, where Jiin proposes that they cut off all ties with the Sky People, wishing to not be exploited by them. His father, the emperor, reveals that Jiin himself was a Sky person, whom he had adopted as a sign of good faith between their peoples. But Jiin has no need for such faith, and reveals that he'd poisoned the Emperor. This outrages his father, but his breath sticks in his throat and he collapses. Jiin calmly walks out of the room, and it is only once the Emperor is dead, that he feigns surprise and sounds the alarm.

At the funeral, he praises the Emperor's rule, before taking absolute military and governmental power. He summons Zairin, and promotes him, citing the need for his close friend to be by his side as he rules the world, and though he says nothing, Zairin's suspicions of Jiin are nonetheless present.

Back at Torafu, they use the time between Digald's attacks to liberate the countryside, spreading their "flag of freedom". Ruuji takes on the role personally, knowing himself to be a symbol to the people, though Seijuurou warns him not to overexert himself. Mii resupplies Zuuri, and checks up on Gin, who still fails to remember anything about himself, but knowing that he was a member of Digald, seeks to try and help the damaged town, and takes up working in the fields.

Ruuji takes on his next mission, to help a camp that is heavily defended by Digald, by raising the troop's moral, thus giving them the edge they need to break the fort's siege. Indeed, this is exactly what happens, with him at the lead, they are able to charge through and claim victory.

However, as the missions progress, he neglects rest in order to take on more and more missions. Mii warns him on his return that he must not continue down this path, lest he become a burden on everyone else. Seijuurou agrees, and calls him a fool after coming out of hospital. Mii goes back to Gin, who continues to have panic attacks seemingly at random. Ruuji's fatigue builds, though he is still able to achieve victory in his battles.

The episode ends with, Jiin's ascension to the throne being recognised by the Sky people.