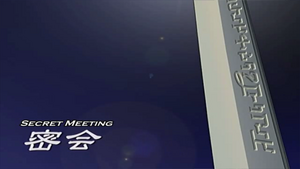 Secret Meeting is an episode from the anime series Zoids: Genesis based on TOMY's Zoids model franchise.

Picking up with the same theme as the last episode, with the anti-Digald army securing victory after victory, but with Ruuji pushing himself further and further into fatigue. Mii in the meantime grows closer to Gin, and eventually, she helps him escape from his confinement in Zuuri.

Ra Kan decides to attack one of Digald's more important bases, and joins up with Mii's troupe to try and ensure victory. Ruuji and Kotona are not included in the assault, and are reassigned to help Mii's backup group. Kotona explains that they need to rest while they have the chance, as even Ra Kan has noted Ruuji's markedly decreased stamina.

When the others head out, Ron's Zoid malfunctions and he is left behind, using this as cover to separate from the group and take part in his own work, and contacts Felme to arrange a meeting. She agrees and flies out to meet him, but on the way, is seen by Gin, who takes over Mii's Lanstag and rushes off to meet with her. Mii set off with Ruuji to follow after him.

Ron meets with Felme, who is revealed to be a Sky person, and demands to know her true intentions, as she has not been complying with the Sky people's orders. It is revealed that her role is to deliver Digald the Bio Ptera, as well as keep an eye on Jiin, although Ron finds it remarkably suspicions that the previous Emperor died on her watch. Felme in turn reveals that Ron was sent to build an anti-Digald force, though she notes that he'd been getting very attached to "the Evolt boy". Likewise, he notes that she'd been very attached to the Bio Kentro's pilot, who she dismisses as naught but a toy. This is overheard by the nearby Gin, who reveals himself, much to her surprise. She suddenly changes her tune, to pretend she had been worried about him, which he quickly sees through. With this, she signals her troops, a contingent of Bio (Mega)Raptors. Ruuji shows up and saves them, but quickly becomes in need of saving himself, when his fatigue sets in, causing him to loose focus and collapse mid-battle. However, the rest of Ruuji's comrades show up and make short work of Digald's forces, having been contacted by Kotona earlier.

Ruuji's fatigue is so great, that he only wakes up after three days of sleep. After this, Gin is finally reported as missing by Da Jin, only for him to run in on Gin sketching a portrait of Ra Kan himself.