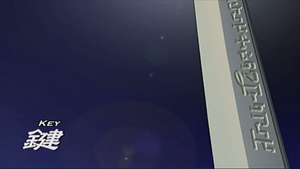 Key is an episode from the anime series Zoids: Genesis based on TOMY's Zoids model franchise.

The episode begins with the anti-Digald army being attacked by an overwhelming number of Bio Zoids, as Digald mounts a counterattack. Their production has been ramped up, and it is revealed that even the Iron Rock facility has been revived.

In Digu, Felme and Jiin talk, revealing that she is looking for the "dragon", which she believes is in Iron Rock, though Jiin dismisses it, not needing its power due to the overwhelming number of Bio Zoids he was producing. Still, Felme is concerned, due to the fact that the Digald resistance now have Souta on their side.

Souta himself is assigned to transport duty, where he and Yakku manage to obtain several Metal-Zi bullets, though the number is painfully small. Ra Kan then asks Ron to ask the Sky people for more, having known his identity ever since the battle at the River of Fog. But Yakku reveals that the number was limited on purpose, and that for any more to be given, the council would have to vote on the subject.

Zairin is also made aware of the sudden surge in numbers, but also begins to figure out that his illness seems to be linked to the Bio Volcano itself.

The Sky people reply with a vague answer, that if they want bullets, they must "come and get them", and answer which, while not a rejection, will keep peace with their allies in Digald, because they know that the resistance has no way of either getting to Sora city, nor any way of getting a sizable number of bullets back if they were to fly up anyway (for instance, with the Rainbow Jerk).

But Ron suggests a plan to accomplish the goal, though the plan is a risky one. Ruuji quickly accepts, ready to take on any obstacle, only to be asked to marry Kotona as the his first duty, much to his surprise. Reluctantly, he accepts, and reveals the purpose behind the request, to learn her true name. But even after Ron and Ra Kan explain the full story, she is reluctant to reveal her name. It is then that Ron reveals his true plan- to revive the colossal flight-capable Zoid, the legendary Gildragon. The one is Katon city was unusable, but his extensive research brought him to the conclusion that Iron Rock must house one that is still in working order.

In flashback, Ron explains that there were those who had wished not to join the people of Sora city, and had left to the surface. But wars eventually broke out, and, fearful of anyone employing the massive power of the "Dragon of destruction", they hid it away, under the city that would eventually be named Iron Rock. It was her name that was probably the password to reawaken the Zoid. But Kotona refuses to go back to Iron Rock, the place where she had naught but painful memories. Ruuji refuses to give up, but before he can ask again, Kotona decides to talk to him alone. She reveals that her family was a league of assassins, who were probably responsible for killing Ron's comrades. They try to explain the story to the rest of their group, but Galaga is just confused by the tale, while Mii is enraged that they trusted Ruuji, and not her, with the tale first-hand.

The next day, Ra Kan assembles all his forces to stage the assault on Iron Rock, with two obstacles left to achieve, firstly, getting into the Gildragon, and secondly, finding someone who can pilot it, hoping that Gin can aid Kotona in its resurrection, with a final, hidden obstacle, Ron thinking that the Sky people may not appreciate what they're about to do, though no more is revealed.