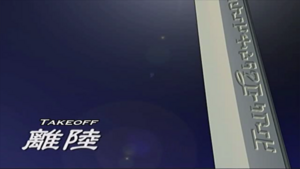 Takeoff is an episode from the anime series Zoids: Genesis based on TOMY's Zoids model franchise.

The episode begins with a full-scale war between Digald and Ra Kan's forces. They newly-deployed Metal Zi bullets give even Danbul's Konig Wolf the ability to annihilate Bio Zoids. Meanwhile, Ra Kan, Ruuji and Kotona head into the underground portion of Iron Rock. Here, they find Digald chasing Rinna and Nouga, though Kotona saves them. Above ground, Iron Rock is overwhelmed, and they request reinforcements. With Zairin's group being the closest to their base, he is assigned to deliver back-up. Rinna reveals that after Jiin's ascension to the throne, Digald had rounded up each and every one of Iron Rock's civilians, leaving only Rinna and Nouga in the town. She agrees to help them, to avenge her fallen comrades. They are led down an elevator and find a Zoid graveyard, inside of which the ruined head of the Gildragon can be seen. It shoots out a beam of light and transports Kotona, Ra Kan and Ruuji on board. Rinna reveals that to start the Zoid, two passwords must be said at the same time, one inside, one outside. The intention was for it to be Kotona and her husband, but as both she and her sister were alive, they could preform it by themselves.

They start the Zoid, but above-ground, Zairin's Bio Volcano is overwhelming the resistance forces, only for the ground to suddenly split, and reveal the colossal Gildragon. Zairin's focus shifts, from saving the facility, to stopping the rebels from getting the obviously powerful, mountainous Zoid that had appeared. Kotona tries to move the Gildragon, but is unable to. Gin is called by the Zoid, and everyone moves to ensure his safe passage. Ruuji and Ra Kan are teleported to the Zoid's hanger, where Zairin spots them, and moves to attack, only to be mobbed by Danbul, Galaga and Seijuurou. Gin gets inside, and figures out that the Zoid is so large that it simply cannot fly with only one pilot. With him and Kotona at the controls, the Zoid slowly comes back to life. Zairin overpowers Seijuurou, saying that he, though good, is not a worthy adversary, he has already mastered his path, and is no longer improving. But as he moves to finish him off, Ruuji arrives in the Mugen Liger, and the two engage in a fierce battle.

With a heave, it takes to the skies, and Ra Kan, Galaga and Seijuurou move to board it. Ruuji engages the Hayate Liger to make the jump, but is followed by Zairin. But before the final battle can commence, his computer takes over once more, and begins to charge his Bio Particle Cannon. Zairin, struggling to halt the computer, is distracted, and Ruuji is able to stab the Volcano through the neck.

But all is not well in the skies, as a colossal air battalion pursues the Gildragon into the Sky.