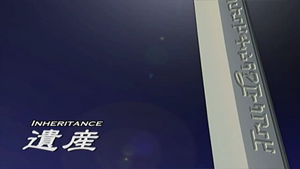 Inheritance is an episode from the anime series Zoids: Genesis based on TOMY's Zoids model franchise.

The episode begins with the Gildragon being chased by Bio Raptor Guis, before a Decalto Dragon arrives to greet them, its powerful cannon proving capable of annihilating the Bio Zoids in a single shot. Para, Ron's commander and pilot of the leads them back to Sora city, while Ruuji attends to the injured Seijuurou and Zairin in the hanger below, the latter's Zoid left in a heap on the Gildragon's wing.

They are guided to the city, only to find that they are sent around to a tiny side gate rather than the main one they are initially guided to. Here, Seijuurou and Zairin are taken away, the latter by the woman who had been dealing with Jiin in episodes prior. Then an inspection begins, while Ruuji and the others are kept onboard. The Bio Volcano is taken by the Sora city people.

A meeting among the Sora city officials is quickly held, where the promise of delivering Metal Zi bullets is fulfilled, though not before noting how much unrest the Gildragon is causing to the citizens of Sora city. With this, Ruuji and co. are finally allowed to disembark, although not without Kotona being forced to hand over her many concealed weapons first.

Ron tells them that the wait will be three days, because they hadn't actually developed the Metal Zi bullets yet, as no-one had actually expected them to really come to the city to get them. He also confirms that Seijuurou's illness, which would have been left unchecked, was completely curable with Sora city's technology, though he has no news of Zairin nor the Volcano. After the debriefing, he takes Ruuji to meet with his superiors, who are interested in his ability to Evolt (although he only takes Ruuji, much to Mii's anger).

Ruuji briefly sees the city, only to note that everyone is in mild uproar over the emergence of the Gildragon. Ron explains that the Sora civilians hate anything warlike (although noting that they had created the Bio Zoids, not caring about surface wars), which is why they so badly want to get the Gildragon to leave. Para explains in more detail, showing footage of the apocalypse later termed "God's Fury". He explains that there were some who had believed the disaster was caused by two sides engaging each other in battle, each side lead by a Gildragon.

Elsewhere Prome begins to explain who she is to Zairin. But Ron has to explain one more detail to Ruuji as they return to the Gildragon, the Generators. These were built several decades after the God's Fury, by Sora citizens, but as they had no Generator themselves, they had no need for Generator mechanics, though he stops off in the library to search for some information about Generators. In the meantime, Jiin continues to talk to Sora's officials, giving them warnings about harbouring the Gildragon.

Ruuji learns that the Generators are built to stabilise the planet's agriculture, air, water, etc, as well as produce Reggel. But the first one took fifty years to be built, with each one after that taking another twenty. But even when built, it was another century before they became operational. Initially Sora had wanted to return to the land, but after so much time passed, they simply gave up, regulated population growth and choose to live in their flying city forever.

On the third day, the bullets are prepared, but Ron is charged with inciting a riot and arrested. Meanwhile, on land, a massive mobile airfield, the Dig, sorties, and begins to deploy an armada of Bio Raptor Guis.