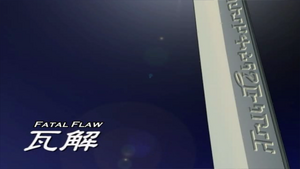 Fatal Flaw is an episode from the anime series Zoids: Genesis based on TOMY's Zoids model franchise.

Picking up in Sora city, Seijuurou is returned to the group, but Ron is not, and is put on trial for leading a riot. But as Para tells them of this, he is summoned to an emergency meeting. The Digald airforce has been mobilising toward Sora city.

Elsewhere Zairin is released and informed that Jiin is a Sora citizen, someone who was sent to maintain the relationship between Digald and Sora city. As the fleet approaches, Sora city's defenses activate, and an Energy Shield is deployed This holds the Guis at bay, but is bombarded by wave after wave of bombs. Eventually, they manage to break the barrier, so the anti-air defences come online, and an unmanned army of Zabats is deployed. These, armed with weapons that are effective against the Gui's armor, manage to stall the oncoming assault.

Jiin contacts Prome, but scoffs at her arrogance, and proclaims himself a new god, and future ruler of the planet.

The Gui forces make it to the main gate, where they are met by two Decalto Dragons, which swiftly obliterate them. A damage report is made, and plans to repair the citadel are drafted.

But the celebrations are short lived, as a second wave, two times as large as the first attacks the city. This surprises the citizens, who have no idea how Jiin got so many Bio-Zoid compatible troops. Para's Dragon is hit and he retreats, while the second one is rammed by a kamikaze Gui and destroyed, much to the horror of the life-treasuring Sora city officials. Felme proceeds with her attack, and enters the city itself, annihilating everything as she goes. In the rear gate, Ruuji and co are contacted by the chairman of Sora city, Bana, who requests their help.

Everyone is quickly evacuated from the city, and are herded to the Gildragon. Wishing to save as many lives as possible, even prisoners such as Ron are released. Zairin sees the Bio Ptera, and tries to get in touch with Felme. Ruuji runs into the city with his Liger and sets about defending the civilians. The Sora city citizens are outraged by the ideal of living with the surface dwellers, but are faced with no option, as their power plants are destroyed, and the City begins to fall.

Zairin gets into the Volcano, and, where he remembers Prome's words, that Jiin had installed a system that was draining his life-force, a system completely independent of the Zoid's functions, and is able to pilot it without pain. Zairin contacts Felme, only to be completely ignored. The boarding of the Gildragon is completed, only for it to be attacked by the air force. Ruuji, Ron, Galaga and Seijuurou quickly sortie to defend the transporter. They stand on the outside as it moves to escape, but the already small gate is partially obstructed, forcing them to fly through at an angle. Souta manages to pull off the manoeuvre, but in the process the Gildragon looses a wing, while Zairin simply jumps out of the falling city in his Volcano. Even without the wing, the Gildragon is able to land safely, and they witness the fall, and resulting annihilation, of Sora city. Zairin's Zoid manages to withstand even this almighty blast, as the episode ends.