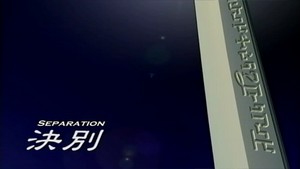 Farewell is an episode from the anime series Zoids: Genesis based on TOMY's zoids franchise.

The episode begins with Jiin proclaiming himself, as the ruler of the Digu, by extension, the world, and by extension, is a God. After the meeting is through, some officials are met by a cyborg soldier.

Back at Torafu, celebrations are underway, as they are now not only faced with fully repaired Zoids, as well as given the (albeit limited) Metal Zi bullets. The Sora City citizens are put to work in Zuuri, something they are completely unaccustomed to, and depression spreads among the new refugees.

Meanwhile, Zairin heads to Digu, but on the way finds his own unit under fire from Digald soldiers, before being labelled as an enemy himself, and is attacked. Reluctantly, he annihilates them. He talks to his subordinates, who reveal that Georg is still "alive", though heavily mechanised. They reveal that when they questioned Georg, even once, just to clarify why he was in charge and not Zairin, they were branded as traitors and hunted down. Zairin is perplexed, and heads to Digu to see Jiin. Upon arrival, he finds a huge number of Bio Megaraptors and mass-produced Bio Triceras. Inside, Jiin reveals the truth, that he and Felme are Sora citizens, and asks Zairin to continue to be a reliable aide in his quest to become a God. But Zairin asks him about the life draining system installed onto it, but he says nothing, instead labelling the information handed to him by Prome as unreliable. Felme too, starts to have her doubts about Jiin, though she says nothing.

Zairin is assigned a new unit, and as he looks over the roster, he is amazed to see his long time friend, Whips de Zaltz, among the troops, even though he could not pilot a Zoid. He goes to investigate, but is forbidden from meeting with his own subordinates, the guard being unable to let even someone of Zairin's rank through; on pain of death.

Back with the anti-Digald forces, Ra Kan meets with Prome Bana and Para to gain information. They reveal that to secure Reggel, Jiin was sent to control Digald, but they never thought he would quickly desire to control the entire surface, nor did they expect the quality of execution that he was able to preform. But most of all, they find is astounding that Jiin was able to find so many Bio Zoid pilots, as, while mass-production of the Zoids was possible, there were only so many compatible people in the world, and he should never have gotten that many troops.

As they are conversing, Zairin breaks into the dorms where his friend was supposed to be staying, only to find naught but the Bio Zoid's robotic soldiers stored inside. But on one of them, he finds an engraving, an engraving with his friend's name on it. To his great surprise, he hears Whips' voice ring out from within the machine. He is confused by why his friend would be inside a robotic suit, but is told that there are no robots, each of them were humans that were placed into the machines to force them to pilot Bio Zoids, as they cannot do anything but obey orders while inside the suit. He pleads with Zairin to let him out, to end the pain he's in, and Zairin quickly accepts. He opens it, only to find nothing inside but a glowing sphere. This sphere is, to Zairin's horror, revealed to be the essence of Whips' soul. Quickly, every drone in the building speaks up, pleading with him to set them free. Distraught, Zairin, never knowing that what he though were naught but tools where actually people, quickly obliges.

It is then that Prome begins to put the pieces together, that Jiin was extracting people's souls, treating everyone as tools to his own end, something that he had learnt after being used as a tool by the Sky people in their dealings with Digald.

Zairin quickly decides that he has to atone. The suffering he had unknowingly created was too great, and both he and Ruuji decide that there is naught but one enemy. Jiin.

Zairin goes berserk, laying waste to Digu's facilities, prompting Jiin himself to show up. Felme, only wanting to see something exciting, is disgusted by herself, as she watches the battle between Jiin and Zairin. Zairin renames himself, proclaiming Digald's Zairin de Zaltz dead, and that his new identity is Zairin the Zoid pilot. Jiin dismisses him, knowing that his Bio Tyranno had already been completed, thanks to the life-draining system on the Volcano, and sets about executing the now-useless Zairin.

The two fire their Bio Particle Cannons at each other, with each negating the others, before Zairin is overpowered, and only saved at the last moment by Felme. Jiin lets them leave, before sending out Bio Raptor Guis all over the land to spread propaganda proclaiming himself to be God, and that all must submit, or be crushed.