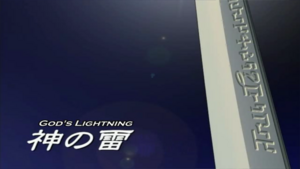 God's Lightning is an episode from the anime series Zoids: Genesis based on TOMY's Zoids model franchise.

The episode begins in Digald, with Jiin destroying the central pillar, which contained their long-dead Generator, claiming it to be an eyesore, much to the detest of some of the other Digu officials.

Elsewhere, the anti-Digald movement finds a Bio Zoid robot warehouse, and their fears are confirmed, that Jiin was taking people and extracting their still-living contained souls to serve in his ever-growing army. With this, Ruuji puts forth a surprising proposition, to join with the Digald army to fight against Jiin- the aim being to assimilate those who are still human to bolster their forces, hoping that revealing the truth about the Bio Raptor drone would be enough to make them revolt. Boraa, who was informed by Zairin, confirms that there indeed would be many who would defect from Digald if the truth were leaked.

In order to do this, Prome and the Sky people set about constructing a powerful communication device, to broadcast the message to all of Digald's facilities at once. Galaga is outraged by the prospect, but is calmed by Ruuji, who implores him to realize that to simply label everyone in Digald as an enemy would be to create a world in which "everyone could smile" would be a lie- as Digald's people were still people in the end. Ra Kan confirms this, that their goal is not to destroy Digald, but to end the war, and that the transmission will be made, and a cease fire requested. A sentiment that gathers unanimous support.

But as they prepare to transmit, an enormous army begins to attack a nearby, lead by Georg and his Bio Tricera. The Metal-Zi bullets prove to be incredibly effective against the soldiers, but have no effect whatsoever on the Tricera, which is protected by an invisible, indestructible, barrier. With this, they were annihilated, as were the Digald soldiers and the whole village. Their intent was not to liberate their forces, but to hide the truth. Boraa informs them of another nearby pilot factory, in order to take revenge against Jiin, who had killed his own forces to hide the truth.

Elsewhere, Zairin enters the same facility that Boraa was referring to, and uses his Bio Volcano, along with his own forces, to secure the base, and reveal the truth. They too defect, but their communication equipment is jammed as soon as Zairin had arrived. With this, Zairin decides that there is no other option but to seek out the resistance for help.

They do exactly this, a messenger is sent to Torafu, which relays Zairin's intentions, as well as confirm that Georg is still alive.

Ruuji accepts, and moves to deploy, only to find Prome standing by his Liger. She explains that in the apocalypse, there was only one technology not stored in Sora city. That technology was the power to Evolt, an extremely advanced, and incredibly powerful knowledge, that is now all but lost.

Meanwhile, Jiin does his own research, the results of which are named the "Jiin Cannon" a name he rejects, in favour of his own one: "God's Lightning".

Boraa, Ra Kan, Ruuji and Zairin finally meet, but initially, Ruuji cannot bring himself to speak to the man who destroyed his village. Later that night, he eventually does this, and Zairin gives him the second volume to his book. Zairin acknowledges his sins, but vows to kill himself, along with Jiin, to wipe them clean. Ruuji dispels these ideals, with his Liger's help, there would be no need for him to die, and eventually, the Generator will be repaired, so that too is not a debt Zairin has to worry about. With this Zairin is impressed, and realizes why he was never able to beat the strong-hearted youngster.

The next day, Boraa is elected to represent Digald, being well-known by his many pupils in the Digald army. With Prome's help, the broadcast goes unimpeded, and announces his intention to join forces with Ra Kan. He introduces Ruuji and Zairin, the most powerful pilots in both armies, to bolster confidence in any potentially doubtful troops. But while this is being broadcast, Georg heads to stop the transmission.

Their forces are grossly outnmbered, so Ra Kan heads to attack Georg himself, but even both he and Seijuurou are blocked by the Zoid's barrier. With the transmission over, everyone quickly retreats. But Kotona spots a new giant Zoid, as Jiin himself is revealed to be on the battlefield. His Bio Tyranno begins to charge its Bio Particle Cannon. Zairin figures out what Jiin is planning, and orders everyone to quickly retreat.

Georg moves to destroy the Bamburian, but is stopped by Ra Kan, who's Zoid is skewered by the Tricera' horns. He orders everyone to run as Georg, seeing Ra Kan, becomes enraged, and tries to kill him. But Ra Kan jettisons his Swords, noting that since he had been dragged inside the barrier, he was free to attack the Bio Tricera, and climbs on top of it, before stabbing it with one of the Bamburia's left over spears, and blasting it with Metal Zi bullets. But the attack is met with resistance, as his Zoid is skewered through the neck. He calls to Ruuji to take care of the rest, as the Bio Particle Cannon fires.

It obliterates the base and everything around it in a colossal implosion of energy. This includes his own forces... And the Sword Wolf.