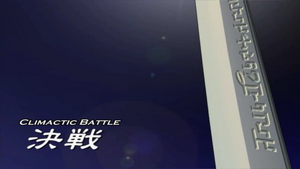 Decisive Battle is an episode from the anime series Zoids: Genesis based on TOMY's Zoids model franchise.

The episode picks up with Da Jin, and Haara being informed of Ra Kan's missing status, and while they cling to hope, the mood is nonetheless pessimistic.

Back in Torafu, the mood is much the same, as their forces are damaged, and their leader is thought dead. Despite this, Ruuji speaks up, and urges them onward. Da Jin is informed of Ruuji's decision to assume command, and Ruuji is informed of the situation with Digald's forces. 60% had agreed to the ceasefire, 30% were unsure, and only 10% of their remaining forces where still opposed to their group. He tries to avoid conflict, and so sends Boraa to continue negotiations, as well as renaming the army from anti-Digald to anti-Jiin. But Da Jin has his own fears. While he knows everyone within their army accepts Ruuji, he is unsure of how the new forces will react to the boy being placed in command.

Zairin moves to Ze Ruft, in order to use the equipment left over there from when Georg was injured the first time around, to help save the injured Sky people who were hastily evacuated from the transmission area the episode before. Bana continues to study the mysteries of Evolt in Torafu. While walking around the base, Ruuji overhears some people doubting his strength and reliability. Rather than confront them, Ruuji and A Kan put on a show to display his "incredible strength", as well as lie about a secret book of war left behind by Ra Kan to instill confidence about his experience. It works, but in private, he is quickly reduced to tears by the loss of his longtime friend.

But while he's doing this, Jiin moves toward Torafu, annihilating everything on the way with his Zoid's Particle Cannon. Resolved to prevent casualties, Ruuji decides to sortie the entire army to meet Jiin before he reaches their fort. He decides to meet in the region appropriately named "Freedom Hill".

That night, Ruuji talks with Mii, who is distraught about the loss of Ra Kan, but is nonetheless resolute to help Ruuji to the very end. Ruuji then meets the troops, and is met with a rousing applause. Bana and Para are unable to find anything about Evolt, but only suggest that in a moment of despair, to call out to the Liger, as a miracle just might happen.

They sortie, and are joined by new Digald forces, as word reaches Zairin, who prepares to leave Ze Ruft and meet up with them. They note that Jiin has no Bio Raptor Guis deployed, and believe that it is because he has naught but robots with him, and therefore does not have the men he needs to operate the flight decks. Ruuji shuts down the army and lies in wait for Jiin to approach.

The plan is simple, to turn off their Zoids and remain undetected, then blast them with artillery from the Bamburian, Brastle Tiger, and all other artillery Zoids, before rushing in with all melee-capable Zoids, to give Ruuji a chance to use the Mugen Liger's two swords to slice through the inside of the Tyranno's mouth, thus seizing victory.

But Jiin sees through this plan, and before arriving at the designated point, destroys a mountain with this Bio Particle Cannon, annihilating the group that had just joined them then day before. With this, the attack commences, with Ron firing in excess of ten times his usual payload, before the others follow through. With this, Ruuji, Galaga and Seijuurou charge at Jiin, while Mii leads the Lanstag battalion.

Jiin is undisturbed, and uses his own men as debris to pin the Liger and his comrades, and the episode ends with Jiin charging his Particle Cannon at point-blank.