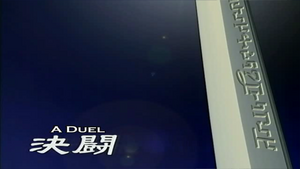 Duel an episode from the anime series Zoids: Genesis based on TOMY's Zoids model franchise.

The episode begins with Rei Mii cooking a barbecue and Ruuji heading into the city to both collect groceries and look for a Generator mechanic. Meanwhile, Kotona is followed by a man, who keeps posing for her, although he is repeatedly ignored. Galaga is his name, and he tries to get her to join up with him. She then decides that rather than trying to talk Galaga out, she'd just make him give up, by telling her that Ruuji was her fiancée, and that the two of them were going far away to live together.

This sends Galaga into a rampage, and he quickly tracks down Rei Mii, literally running through walls to get at her, mistaking her for Ruuji, despite her being female. He explains the story and drags Rei Mii along with him to get her to point out Ruuji to him.

Ruuji, meanwhile, isn't having much luck in the search for the mechanic, with no-one even having heard of one, let alone being one themselves. Kotona agrees to help him in his search in exchange for him going along with her story. Rei Mii and Galaga eventually find him, and immediately starts attacking him (and so does Mii). Galaga refuses to give up on Kotona and challenges him to a duel. Ruuji runs for it and ends up near the Murasame Liger. He tries to explain himself, but Galaga puts words in his mouth and ends up making the duel a Zoid battle instead.

Ruuji, not wanting to let Kotona down, agrees to the duel. The two head for the ghost town nearby, along with Kotona and Rei Mii. Galaga reveals his Zoid, the Deadly Kong. Galaga gets the upper hand, punching the Liger at close range, and throwing things at it while at a range.

Meanwhile, Ra Kan talks to the leader of the city. They discuss the threat posed by Digald, noting their ever-increasing and highly menacing presence. As the meeting ends, Ra Kan hears the sound of the battle between Ruuji and Galaga, which is becoming more and more intense. Galaga appears to gain the upper hand, but Ruuji starts to use the terrain to quickly escape and out maneuver Galaga. Galaga walks into a dead-end, and Ruuji charges in from behind. It is then that the Deadly Kong's backpack is activated, but before anything can happen, Ra Kan uses his Sword Wolf to interrupt the battle.

Ruuji gets an opportunity to explain himself, and Galaga laughs the whole thing off. But as they speak, the night is illuminated by flares, which Galaga immediately recognizes as an indicator that his comrades are under attack by Digald.