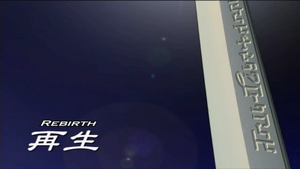 Rebirth is the final episode from the anime series Zoids: Genesis based on TOMY's Zoids model franchise.

The episode begins with citizens from all over wondering how Ruuji's battle is going, with the last of these being the mechanic Jingo, who meets a shadowy figure briefly, before the episode cuts back to the battle.

Jiin's cannon is levelled at Ruuji, but Gin moves to save him. He uses the lance salvaged from the Bio Kentro, but Gin is caught in Jiin's mouth and thrown around by the Bio Tyranno. His cockpit is nearly crushed, when Felme uses the Bio Ptera to try and save him, but Jiin grabs the Kentro's lance and throws it at her, skewering her Zoid through the cockpit, destroying it, and her. Ruuji, knocked free by the flailing Lanstag, tries to save him, but is blocked by the Tyranno's deathscythes. It is Seijuurou, who approaches from the other direction, and outmaneuver Jiin, who is able to save the boy. Jiin then turns to Ruuji, who is informed that the Tyranno's Bio Particle Cannon is spreading fear, and that they will be overwhelmed if it continues to function. Out of desperation, Ruuji switches to the Hayate Liger, and he and Seijuurou slash at the Tyranno's head in rapid succession. But its armor is far too strong, and they are knocked back by its scythes, powerless in their fast, but weak, Zoids. Jiin once again prepares his Cannon, but before he can shoot, Zairin fires his own Cannon. The two clash, and Jiin's beam is deflected, toppling his own aircraft carrier. But wile the Tyranno is undamaged, the Particle Cannon is destroyed. With this, moral is restored, and their forces surge forward once more.

Seijuurou is the next to attack Jiin, but as he does, he is grabbed, and his Zoid Core is shattered by Jiin's Tyranno, killing the Soul Tiger. Elsewhere, a Gustav hurries to the battle, which rapidly erupts into chaos. Danbul is the next to attack Jiin, but her bullets fail to harm him, and her Konig Wolf is skewered by dozens of Bio Kentros. Kotona surveys the battlefield, but is struck by a Bio Tricera's horn. Galaga rushes to save her, and uses his Zoid's scissor arms to destroy swaths of the mass-produced Zoids. But as he reaches Jiin, he fears even this weapon is unable to scratch him. The Deadly Kong's core is the next one to be destroyed, and he is skewered by a rain of missiles from the many Bio Kentros, using himself as a shield to protect the downed Kotona.

Zairin races across the battlefield to fight Jiin, and is able to use his Zoid's mobility to puncture the Tyranno's Zoid core with one of his Crystal Horns, but it snaps before sinking in deep enough to stop the Tyranno, and he is thrown backward into the toppled aircraft carrier, which collapses onto, and buries, his damaged Zoid.

Ruuji and Ron are the next to try, once again aiming for the inside of the Tyranno's mouth, but as the Mugen Liger and Bamburian mount a combined assault, the Tyranno catches on of Ron's halberds and skewers the Bamburian with it, before using Ron as a human shield to stop Ruuji. Ron implores Ruuji to slice through him anyway, but given that one moment's hesitation, the Tyranno is able to shatter the Mugen Liger's Zoid Core, killing it.

As it collapses, its sword falls from the Zoid, which changes back into its Murasame form and lands lifeless at the feet of the Tyranno.

Jiin isn't satisfied with just finishing off the Zoid, and decides to kill Ruuji himself. Mii blocks him, but is thrown aside. She does not relent, and he slices her Zoid to pieces, eventually ripping its head off and set about crushing Mii's cockpit in its mouth.

Ruuji begs the Liger to move, to save Mii, and has a brief flashback, where his plight at being the only person in his family to be unable to pilot a Zoid, with his parents even thinking that he would be an unreliable heir, and indirectly insult him while praising Faaji behind his back. Depressed, he was seen praying to his ancestors, the shrine built around Murasame Liger's Sword, to be able to pilot, one, if only one, Zoid.

But it is then that he realizes that the Liger heard his prayers, and answered his call. It also found out by the Sky people that Evolt is a powerful, will-based, regeneration machine.

Responding to his prayers, the Liger resurrects itself, reconnects with its blade, and saves Mii, much to Jiin's amazement. But before he can attack Ruuji, Galaga charges the Tyranno, using the second Zoid Core found in his backpack. It grapples with the Tyranno as Zairin, who had not been defeated, once again rushes in to attack Jiin, this time smashing open the armor around the Tyranno's Zoid Core. Ruuji Evolts into the Mugen Liger, but Jiin uses his Zoid's Deathscythes to grab both the Kong and Volcano, to use them as shields, only to have both arms sliced off by a sudden strike made by the Sword Wolf. With this, Ruuji is free to land the final strike, and cleaves Jiin in two with the Mugen Liger.

As the Tyranno explodes, all of the Bio Raptor forces shutdown as the souls contained within are released.

Ra Kan explains that he was saved by the Bio Tricera's barrier, and was able to make it Sakura village, where Jingo had repaired his Zoid.

With that, the army is declared victorious, and the episode comes to an end. Danbul is shown to have survived, and she talks with Zairin, who leaves to try do more to repent for his actions with Digald's army.

Briefly, at the end of the episode, it is revealed that Ruuji did indeed return to his hometown, using the Murasame Liger as a new core to restore the damaged Generator.