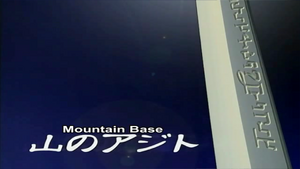 Mountain Hideout an episode from the anime series Zoids: Genesis based on TOMY's Zoids model franchise.

The episode begins with Zairin discussing a Guerrilla problem, one that is more problematic than normal adversaries, as they had been able to take out 18 Bio Raptors. Thus, Zairin decides to head to the Guerrilla's base and destroy it personally.

Galaga, the leader of this group, decides to head back to base to fight off Digald. Ruuji joins him, as do Kotona, Ra Kan and Rei Mii. The resistance's Baratz use traps to pin down and halt the advance on the Bio Raptors, while Zairin waits for the Deadly Kong to show up. Inside, Ron prepares a plan for taking out the Bio Raptors, but his Zoid, the Bamburian is not operational, forcing him to wait for Galaga's return.

Zairin, rather than try his luck with the base's many traps, decides to stage one of his own. Using his Megaraptor's superior agility, he captures two of Galaga's comrade's Zoids, and uses them as bait to lure the Deadly Kong into terrain where it doesn't have an advantage.

Ruuji (much to Galaga and Mii's horror) sets off in the Rainbow Jerk with Kotona, (as his eyesight is the best) in order to scout out Digald's troops. Ruuji spots the Digald Forces, and with this information, they are able to use Kotona's Zoid to move the other's Zoids and lay an ambush as Galaga, charges in from the front.

Zairin, still thinking he has Galaga outnumbered, attempts to fight Galaga, only to be quickly attacked and overwhelmed by their combined forces. Zairin only manages to escape by triggering a landslide, but nonetheless, Galaga is able to save his friends.

Retrieved from "https://zoids.fandom.com/wiki/Zoids:_Genesis_Episode_6?oldid=62478"
Community content is available under CC-BY-SA unless otherwise noted.