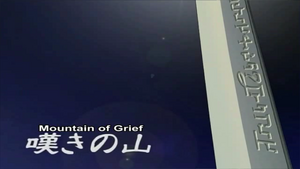 Mountain of Grief an episode from the anime series Zoids: Genesis based on TOMY's Zoids model franchise.

Picking up where the last episode left off, Galaga celebrates his victory, swelling with confidence over the fact that they not only won comprehensively, but that they now have many large-scale Zoids. Rei Mii and Ruuji object, knowing that now that Digald know of the base's location, it is only a matter of time before it is wiped out.

Zairing apologizes to his leader and prepares a new offensive, while Galaga tries to assimilate Ruuji and co into his group. But his confident attitude is really just a front. Even if he wants to, he cannot evacuate, as there are simply too many people who are too badly injured for him to leave.

Ruuji learns of this, and decides to stay long enough for the worst of the injured to heal. Ra Kan and Kotona agree as well. Ron lets slip that there are no Generator mechanics nearby, but they did pass through and do exist, although this information is incredibly vague.

The next day the attack commences, though Zairin gives them time to prepare before launching his assault. The battle does eventually start, but even all of them combined are outnumbered, and they are forced back into the valley, where traps await. Unfortunately, this does not go as planned, and Bio Zoids appear above the valley, destroying the traps and trapping Galaga's group instead.

They retreat back into the cave while Ron evacuates the wounded. Galaga intends to use himself to cover everyone's retreat, but one of Galaga's comrades sacrifices himself to do the job instead.

They retreat into the Cave, but they are thoroughly outnumbered. Ron suggest sealing themselves inside with a forced avalanche, but with no backup, Ra Kan rejects this plan. Instead, they use their Zoids to cut through the back wall of the cave and escape, blowing the cave up on the way out, allowing them to escape Zairin's forces.

Despite the escape, the mountain fort is nonetheless destroyed, and the resistance force smashed. On this note, the episode ends.

Retrieved from "https://zoids.fandom.com/wiki/Zoids:_Genesis_Episode_7?oldid=62479"
Community content is available under CC-BY-SA unless otherwise noted.