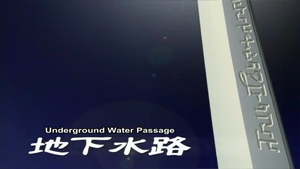 Galaga disbands his forces and heads off to Sakusa, where a Zoid mechanic is repairing Ron's Bamburian, also hoping that this mechanic knows how to fix a Generator.

But these plans are waylayed by a more pressing concern, the fact that their Zoids are almost out of Reggel, with Kotona's Zoid crashing from a lack of fuel. They head back to Harayado, but find it swarming with Bio Zoids and Digald soldiers. They send Ruuji in via the sea, wearing a turtle-helmet with a snorkel on it, allowing him to sneak in and speak with Haara, although Zairin speaks with her first, and nearly gets caught (Zairin literally walks over Ruuji as he walks through her garden). She explains that Digald is vigilantly guarding the Generator, but there exists an underwater tunnel that will allow him to gain passage to the Reggel.

They proceed with the plan and begin by using the Sword Wolf and Deadly Kong to distract the City's guards. Meanwhile, Kotona and Rei Mii give Ruji a pouch to fill with Reggel, and he sets about swimming through the underwater, underground tunnel to retrieve the Reggel.

Zairin is awoken by his officers, and he immediately thinks something is amiss when he learns that there are only two Zoids attacking. He prepares his Zoid, but otherwise does not sortie. Rei Mii uses her Lanstag to pull the Reggel back through the cave. However, it gets caught on some submerged logs. Ruuji manages to free them, but is pulled away from the bags by the current. Despearte for air, Ruuji surfaces in a fountain... A fountain that feeds a bath Zairin was using. The two see each other, and Ruuji dives, making it out this time. This gives Zairing the clues he needs to figure out they were hiding, and manages to surround Ruuji. However, Ruuji is able to escape when Kotona arrives and uses her refilled Zoid to fly him to safety. While this is happening, Galaga goes berserk and slays several Bio Raptors our of sheer grief for his fallen comrades. The next day, he joins Ruuji's group, and sets off with them.