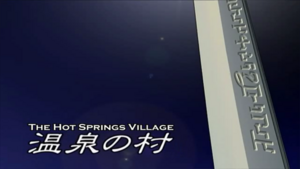 With their Zoids resupplied, the group head to Sakusa, a Village that has not only Ron's Zoid, but also hot springs. Ruuji is caught by surprise, having never seen a hot spring before, and initially believes the village is on fire.

They go to see the mechanic, Jingo, who is busy working and does not reply to Ruuji's questions about the Generators. Ron gets his Bamburian back off the mechanic and challenges Ruuji to a practice session. They duel without weapons, but Ron easily dodges Ruuji's assaults, evading by only a sliver so as to catch Ruuji off-guard. He is quickly able to win.

Ruuji is further disheartened when he learns that the Generator cannot be fixed by Jingo, but he had dealt with a Generator mechanic and has his address in his accounting books, giving them a lead.

They relax in the hot springs, but are interrupted by an attack by Wild Zoids, Elephanders who gather in the area to consume the naturally-occurring Reggel. Ruuji, wanting to become a more capable pilot, seeks out an Elephander and fights against it. The huge Zoid is able to throw and overpower Ruuji. It quickly becomes an uphill battle. Ruuji is able, by following Ron's advice, to evade by a sliver and slice off one of its tusks.

But this does not defeat the Zoid. Instead the tables turn further against Ruuji, as multiple Elephanders show up and attack him all at once. He is only saved when a Soul Tiger appears out of nowhere and defeats two, causing the rest to retreat, but Ruuji doesn't know if this new Zoid is friendly or not, and the episode ends.