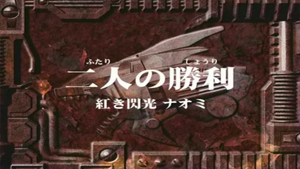 New Partners vs. Naomi the Red Comet is the second episode from the Zoids: New Century anime series, based on TOMY's Zoids model franchise.

The episode begins with Bit doing trial runs in the Liger Zero, who, using the Liger's boosters and anti-lift stabilisers, gets it up to a high speed, although Leena and Brad quickly comment at it's lack of any real weaponry.

After the test (ending with Bit hurting himself with his own harness which Liger Zero laughs at him), a battle is shown featuring Naomi Fluegel, the Red Comet, an undefeated Zoid warrior who has the record of having not one enemy get within one thousand yards of her Zoid. She lives up to her reputation, quickly besting three Heldigunners from long range, even though they had burrowed underground. After the battle, Naomi heads to a bar and picks up two complete novices as "filler" pilots to allow her to partake in team battles. Indeed, her very next battle is scheduled to be a team battle, her opponent being the Blitz team.

This battle is not under standard rules, instead being a "duel" with the participants limited to only six shots. Because of this, Dr. Toros decides to send Jamie and his Pteras into combat in the next battle, to take advantage of the Zoid's ability to fly. Bit, refusing to let his Zoid get passed off as worthless, heads out to a junk dealer to buy some Helidigunner parts. After the purchase, Bit returns to a bar and absent-mindedly helps out Naomi, not realizing who she is. Eventually, he puts the Heldigunner's weapon onto the Liger, with the help of Leon.

The next day, Brad and Leena head into battle, piloting their Command Wolf and Dibison respectively, with the plan being for them to act as decoys, allowing Jamie's Zoid to launch as soon as the battle starts, hopefully catching Naomi off guard. However, their plans go awry when Bit shows up and the catapult malfunctions, due to Leon sabotaging the circuits. Bit registers and the battle (mode 0988), begins, much to the horror of Dr. Toros.

Naomi quickly heads for higher ground and Leena shoots at her, firing four poorly-aimed shots, wasting most of her six shots. Bit is the next to attack Naomi, but even after firing all six shots, misses by a large margin, all his shots impacting harmlessly on the mountainside. He jettisons his gun as Brad and Leena make for a nearby forest. They spilt up, though Naomi quickly finds and defeats the Dibison. Brad stumbles across Naomi's two partners and takes them out, but he himself is taken out by Naomi's sniper rifle. Bit, making a beeline for the base of the mountain, is the next to be targeted, but is saved when the cliff face crumbles from Naomi's feet, as a result of Bit's shots damaging the edge she was standing on, causing her to loose her aim and fall to the base of the mountain. He moves in for a Strike Laser Claw, but Naomi still manages to get a shot off. However, before it hits, the Liger activates it's boosters and dodges the bullet, allowing Bit to defeat Naomi and finish the battle.

No-one knows whether the cliff crumbling was simply a fluke or was created out of Bit's skill and are reluctant to give Bit credit for his victory. Regardless of which case is true, Naomi acknowledges Bit and his Liger Zero are still the first ones to have dodged her bullet and are the first to ever defeat her as a result.