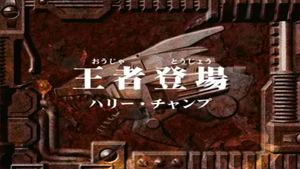 The Prince Arrives - Harry Champ is the third episode from the Zoids: New Century anime series, based on TOMY's Zoids model franchise.

The episode begins with Harry Champ defeating several Rev Raptors in his Dark Horn, as part of a training exercise. Meanwhile, the Blitz Team partake in a battle against some Helcats and a Sabre Tiger, with the Blitz team emerging as winners.

After the battle, Bit eyes his felled Sabre Tiger and salvages the Zoid's shock cannon, placing it on his Liger Zero (although one barrel cracks, hence, the Liger ends up with only a double-barrel weapon, rather than the original three). Although Bit is all but ignoring Leena (who is outraged at him for defeating the Sabre Tiger, which she was on the verge of defeating), Harry (who has a massive crush on Leena), watching from afar, mistakenly believes there is a friendship between the two and accosts Bit. Leena decides to take advantage of Harry's misgivings and pretends to be close to Bit, causing Harry to overreact and challenge the Blitz team to a duel, with the objective being to fight for Leena's affection. Not paying attention, but willing to have a battle anyway, Bit accepts.

The battle is a battle mode 0973 "blind battle", that is, it takes place in a confined city, with massive buildings blocking out everyone's peripheral vision, along with limiting maneuverability, as the Zoids are confined to very narrow roads. The six Zoids (Dibison, Liger Zero, Command Wolf, Dark Horn, Heldigunner and Stealth Viper) enter the battlefield, with Harry accompanied by his two robots, Benjamin and Sebastian.

The first near-miss is between Brad and Leena, who almost engage each other, but manage to stop themselves before they launch their attacks. The first real battle is between Bit and Harry. Sneaking up through a building, Harry gets on Bit's tail, spraying him with attacks (although he misses constantly). Benjamin takes on Leena and Sebastian takes on Brad. Bit, thinking Harry's Dark Horn is incapable of cornering, constantly makes left turns, even blowing a tunnel in a building when he runs out of streets to run down, although he fails to ditch Harry's heavily customised Dark Horn. Leena takes out Benjamin but before she deals the final blow, she notices Brad getting the best of Sebastian nearby and changes her target. She fires an assault at Sebastian, even though she catches Brad in the crossfire, before returning to finish off Benjamin. Meanwhile, Harry finally scores a hit on Bit, but his gloating turns to confusion as his Dark Horn collapses in a heap. Being top-heavy and forced to turn left over and over, his Zoid's legs give way and Bit blasts off it's guns. Reluctant to surrender, Bit moves in to finish him off. He never gets his chance though, as Leena interrupts and blows both Bit and Harry up with her Dibison, thus scoring all the points in the battle.