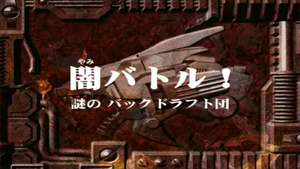 Unsanctioned Battle - The Mysterious Backdraft Group is the fourth episode from the Zoids: New Century anime series, based on TOMY's Zoids model franchise.

The episode begins with a lengthy battle between a Heldigunner and Godos. However, before the battle can be concluded, the Backdraft Group intervene and destroy the Judge, ending the battle using their Battlejack. Back at Toros Base, Bit returns from unsuccessfully trying to salvage parts, finding only some worthless junk. After he returns, Jamie gets him to meet up with Dr. Toros in a staff meeting. However, he isn't in the meeting room and the duo only find Brad. Deciding to take a shower, Bit heads off to the shower, without checking the schedule. He walks in on Leena, who overreacts and pulls out the bathtub, chasing Bit around to teach him a lesson. Fearing for his life, Bit panics and rushes off in a hurry, grabbing his car and high-tailing it back into the desert. Leena's gaze chances upon Jamie's Pteras, and she heads off after Bit, blasting him into oblivion with the Zoid's many bombs. Satisfied, Leena happens across the site of the Godos and Heldigunner. The Backdraft, knowing they can't have anyone witness their operations, promptly shoot down her Zoid and kidnap her.

After using her as bait to set up an unsanctioned battle with the Blitz Team, Dr. Toros sends out Jamie in Leena's Dibison and Bit in his Liger Zero (Brad had left, as he was not being paid to participate in the illicit match). The battle begins, with Bit and Jaime immediately coming under fire from stealthed Helcats. Eventually, Jamie figures out how to track them, by using their footprints to locate them, allowing Bit to take out one of the Backdraft's Zoids. Not playing by the rules, the Backdraft send out the Battlejack, which bowls into and defeats Jamie's Zoid. Bit manages to lure the giant ball into a cliff, jamming it against the rocky wall and immobilising it. However, Bit is pinned down by even more fire, this time from both the Helcats and Polta's Sabre Tiger, making it three on one (however, not having any rules, this is allowed by the judge). Before he can be defeated, Brad returns (after being offered Bit's future paychecks) and fires on the Helcats, temporarily shutting off their stealth, allowing Bit to take them out. Without Jamie's support, Brad simply fires randomly and kicks up a dust cloud. The cloud parts on Polta's Zoid, which gives Bit something to aim at, thus letting him finish off the Gold Team.

In the meantime, Leena manages to escape on her own, dealing massive damage to the Backdraft's Whale King on her way out (although the Pteras also takes a battering, much to Jamie's horror).