Liger Unleashed! is the first episode of the Zoids: Wild anime series, based on TOMY's Zoids franchise. The episode was first broadcast in Japanese on 07/07/2018, and premiered in Korean on 08/09/2018. The English release debuted on Netflix, 18th August 2020.

Arashi sneaks out of the safety of his village, intent on catching a Zoid. He comes across a Pincers, and tries to catch it using multiple traps he had set up ahead of time, all of which the Zoid defeats. As it goes to attack him directly, he is saved by Quade piloting Zaber Fang. Quade introduces Team Supreme before heading back to Arashi's village. The other members of Team Supreme are revealed to be: Pach, Scrapes, Shade, Tremor, and Dyna.

They talk a bit about the legendary "Lion" that escaped from the "Dark Metal Empire" led by Gigaboss.

Arashi leaves and talks about trying to find a Zoid to be his partner. He goes up to the Zaber Fang, who he gushes over after seeing in action early, but Quade points out that Zoid is his partner. Tremor pilots a Grax, which Arashi is familiar with. Flashback of Arashi's father, who also piloted a Grax. He used it to save the village, telling Arashi to find a partner of his own, before then leaving the village on another adventure.

Arashi hears the Liger's roar in the forest below and goes to find it. The Liger's gaze paralyses him with its intensity. Arashi is convinced to make the Liger his partner.

Dark Metal Empire forces show up and attack the Liger. Arashi defends it, insisting he's not an enemy. Eventually he wins over the Liger. Quade arrives, but holds back when he sees the key appear from the Liger. Arashi uses the key to activate the Wild Liger’s "Wild Blast", and goes to fight the Dark Metal Raptorrixs and soldiers. 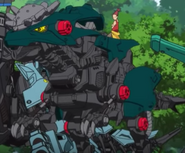 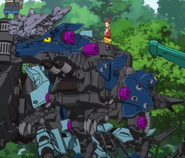