Revving up the Revolution! is the eleventh episode of Zoids: Wild. It first aired in Japan on September 15, 2018.

This episode sees Arashi and Analog head into Dark Metal territory. They look for food, but see a fang from a Rapterrix instead. They then come across Battalia, who followed them after after learning Greta send them into the Dark Metal Empire.

After the tooth they find a pit of Zoid remains, parts left from Dark Metal experiments. Nearby they notice a heavily fortified base.

Arashi wants to Leeroy Jenkins the enemy base, but Analog suggests a thinking of a plan. They butt heads until Batallia shows up, captured by Dark Metal forces.

Inside the jail they mention a few things, Battalia's sorry for getting them captured, while Arashi's thankful for getting inside (and Analog sees it as Dark Metal's fault, not hers). Eventually Malware shows up and is introduced as one of the Four Dark Warriors.

Malware offer Analog the chance to resume development of Hackers keys for Dark Blasts. Arashi refuses because he knows Analog loves Zoids. But contradicts him and accepts, Arashi lets him go.

At night, Battalia tries to cheer Arashi up, but is surprised when Arashi is actually already cheerful. He knows Analog wouldn't accept the task of making keys without some plan. He fully trusts Analog because they are comrades, to he surprise of Battalia.

As Arashi suspects, Analog indeed has his own plans and tries to free the captive Zoids by stealing the key from one of the researchers. He does so while the researcher is sleeping.

Analog gets in his Zoid and starts smashing the place until Dark Metal Rapterrix show up and begin to take him down as his Wild Blast subsides. Arashi shows up in the nick of time, and they dispatch the Dark Metal forces with the help of Batallia as well. 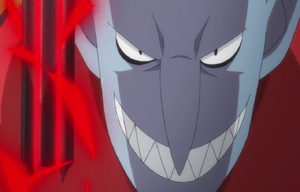 Malware then shows up riding his Overbyte and unleashes his Dark Blast. (All Four Dark Warriors have Dark Blasts). The episode ends there.