Sneak Attack! Tricks and Traps! is the twelfth episode of Zoids: Wild. It first aired in Japan on September 22, 2018.

This episode picks up where the previous one left off. Arashi, Analog and Battalia are locked in battle against Malware.

Malware turns out to be rather snively, he jumps off his Zoid and begs for compassion, but launches a sneak attack. When Arashi overcomes it, Malware promises to fight fair-and-square, only to again launch a sneak attack. This carries on for some time, with Arashi being dragged into the water. Unlike the first episodes in the series, when Arashi is faced with personal danger, he doesn't abandon the Liger. They make their comeback and use their Wild Blast against Malware.

Malware resorts to more underhanded tricks, and eventually this leads to him deploying a smokescreen. Battalia's goggles on her head are used here, and she watches on. Arashi, lacking any kind of gear, instead trusts the Liger. Using their instincts they are able to beat Malware. Much to Battalia's surprise.

As the battle concludes, the Liger presses Malware's remote and Malware is sent flying team-rocket style.

But that's not the end of the episode.

The trio head outside, only to find a huge mass of Dark Metal forces. In the middle, is none other than Gigaboss himself.

Arashi, of course, is undeterred. His comrades for once, think he might actually be able to fight him. (having just beat Malware - one of the Four Heavenly Kings).

Gigaboss engages using a purple and yellow Ruin. Arashi quickly finds out Gigaboss is in a different league to all the other opponents he's fought. Despite not using a Dark Blast, Gigaboss is much faster than Arashi, and the Liger's quickly outmatched. Arashi is knocked off the Liger, but it comes back to stand over him. As Gigaboss approaches, the two look doomed.

However, at that moment, the Zaber Fang appears and deflects Gigaboss, Quade arrives in the nick of time. 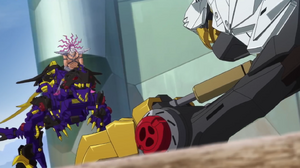 Battalia and Analog had heard of the legendary Zoid Seeker, Quade, but until now hadn't met him. So they are surprised when he and Arashi immediately start butting heads.

Nevertheless even with Quade's arrival, they are still up for a tough fight.

The episode ends ominously pointing out that Demise is still to come.