The Ultimate Zoid in History, Death Rex is the thirteenth episode of Zoids: Wild. It first aired in Japan on September 29, 2018.

This episode is a showdown between Bacon and Gallagher.

Bacon responds by using his Wild Blast for the first time.

But this episode's called "Death Rex" for a reason. Gallagher asks to don his most powerful Zoid, the Death Rex.

The Death Rex is a legendary Zoid, feared by everyone. An Apex predator it sat atop the food chain. It's said to have defeated half of all Zoids species. It's so dangerous it was bound by chains.

None the less, Gallagher uses the Zoid and challenges Bacon.

The Death Rex proves absolutely brutal. When Arashi tries to intervene, Bacon is forced to cover him. Bacon's Fang Tiger being wounded in the process.

Bacon gives Arashi his headband. Arashi, manages to tell Bacon the name of his team for the first time: "Freedom". Exhausted from the prolonged battle, Arashi collapses. Penne and Onigiri listen to Bacon's pleads for them to escape.

Bacon, himself wounded along with the Fang Tiger then turns his focus to Gallagher.

A great fight ensues, Bacon pushing the Tiger further and further past his limits. But the combination of being injured and surrounded by Death Metal Raptors proves too much. Bacon is defeated. 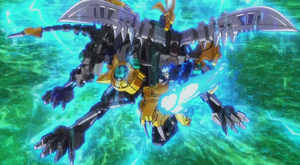 Offscreen, both Bacon and the Fang Tiger die to the the Death Rex and Gallagher.

The scattered members of Team Supreme all react, despite being unaware of what just happened.

When Arashi awakens, he immediately tries to head back to help Bacon. But Candy (the only other Team Supreme member present) convinces him not to. Arashi looks inside the folded bandanna, and finds a Zoid Key within. It's not Bacon's Zoid key.

Retrieved from "https://zoids.fandom.com/wiki/Zoids:_Wild_Episode_13?oldid=66699"
Community content is available under CC-BY-SA unless otherwise noted.