Rampage and Ruin! is the fourteenth episode of Zoids: Wild. It first aired in Japan on October 6, 2018.

Arashi tries to mask his sadness towards Quade with overzealous actions, reinforcing his commitment with his team-mates. He manages to fool nobody but himself.

Eventually Drake shows up and begins to fight Arashi.

They both start by using their respective moves, Wild/Death Blast. As usual, Arashi isn't able to harm Drake.

However, things begin to go awry when Drake taunts Arashi, reminding him of what happened to Quade.

This causes the Liger and Arashi's Wild Blast to change purple, entering a Berserker rage.

While they quickly overwhelm Drake, Arashi recklessly attacks everything, including Battalia and Analog. 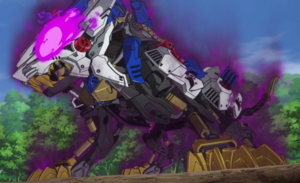 Eventually Arashi is knocked off the Liger and returns to normal, forgetting everything that happened while in this mode.

Retrieved from "https://zoids.fandom.com/wiki/Zoids:_Wild_Episode_14?oldid=68836"
Community content is available under CC-BY-SA unless otherwise noted.