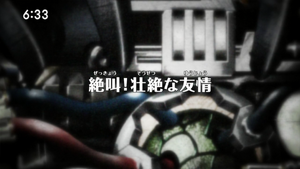 Arashi heads back to Freedom to tell them about the information he gained regarding the Great Ancient Treasure Z. He sees nearby is the Volcano talked about in the legend.

When he arrives, he sees a Grachiosaurus and assumes Death Metal attacked them using Kuroame's Grachio. He wonders who it was, suspecting one of the Kings, like Caviar. That's when he sees his own father. The Grachio is his patner.

It is revealed that his father had met up with Freedom on the way, looking out for a group of Raptors. He had been absent, exploring the vast world for many years. Arashi asked why he had sent no letters or otherwise contacted him. Arashi's dad was confused, not realising he had been gone 10 years, thinking he had been absent only 3. He was relieved to hear Arashi's grandfather was still well after all that time. The others learn about how he defeated a meteor before the series started. Arashi's dad explains all the things he had done, such as finding Zoids, training martial arts, pottery, and even meeting lots of people (such as the RAP members of Death Metal).

Arashi and the others engage using their Wild Blast, greatly exciting Arashi's father. However, when Arashi goes to use his King of Claw Spiral, he stops. He tells the others what happened with Avocado in the previous episode.

Unable to fight, he finds himself virtually pinned and about to be crushed by the Grachio.

That's when Arashi's dad jumps in. Both engage their Wild/Death Blases and it quickly becomes a Grachio-vs-Grachio slugfest. They match each other's moves, while the shockwaves disrupt everyone else in the area.

The battle proves too fearsome. The Grachio's ground hammer is so powerful that two of them fighting in tandom cause tremors strong enough to trigger minor eruptions from the volcanos nearby. Foiegras retreats.

Arashi's father doesn't. He had come for the Raptors after all, and couldn't let them stay in danger. Arashi comes up with an idea to use Zoid Soccer to lure them away. It succeeds.

At the end of the episode, Arashi's dad again decides to leave, going wherever the wind would take him (words that Salt in particular recognises). Arashi's dad is so aloof he doesn't care for the Great Ancient Treasure Z, nor the Death Metal empire (who he was calling "Metal Death") he just wishes to explore the great world. He leaves those issues up to Arashi and the others. He reminds Arashi that the world is vast, and that even Death Metal were just a tiny part of it. Arashi gives his father his "book of adventures" which he remarks is nothing of the sort. But he accepts it anyway.

Retrieved from "https://zoids.fandom.com/wiki/Zoids:_Wild_Episode_45?oldid=62214"
Community content is available under CC-BY-SA unless otherwise noted.