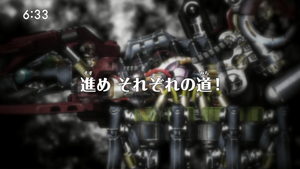 The team lament where the Great Ancient Treasure Z may have gone. They realise that it's likely been taken by the Death Metal Empire. As they discuss it, members of the resistance show up.

Elsewhere, with the Mushi Hermit, Team Supreme try and gain information about the Great Ancient Treasure Z. The legends say that in the past the Death Rex appeared and caused great havoc among humans. Since they lacked the power to stand up against it they instead offered a person to appease it. This was never going to work, but a "miracle" happened, and the Zoid Key of the Death Rex was bestowed onto that person. The Wild Blast of the Death Rex brought about new life and prosperity. The Death Rex allowed that person to be a King of the ancient civilisation.

Supreme realise that the title "King" was likely to fall into the hands of the self proclaimed Emperor Gallagher, and they set off to face him. The Mushi Hermit reviews his belongings and finds a fingerprint in the archived texts of legend, he realises it must belong to Gallagher when he trained there.

Back with Freedom, the resistance notice Drake is there. They are antagonistic towards him, having lost many times to his hands. But Arashi stands up for Drake. While they argue rocks begin to break on their surroundings. Drake engages his Wild Blast to defend the resistance and the children brought with them. This gives Arashi and Salt enough time to use their own Wild Blasts to also help.

However, a final rock begins to fall above Onigiri and Penne. At that moment Gyoza appears and saves them both.

The resistance reluctantly agree with Drake's reformation, and leave on their way.

Arashi wants Drake to tell them the direction to Death Metal. Which he does. He then leaves.

As Arashi and the others go, they run into Sanratan, who tells them they were going the wrong way. Drake had lied and was headed solo into Death Metal. He passes a huge army on his way and the episode ends with him confronting Gallagher.

Retrieved from "https://zoids.fandom.com/wiki/Zoids:_Wild_Episode_48?oldid=62384"
Community content is available under CC-BY-SA unless otherwise noted.